We're less than 3 months away from the 2019 Hofbräu Lenny Coyne Memorial U.S. National Masskrugstemmen Championship at the Oktoberfest in Central Park and Steuben Day Parade and we checked in with Emily Pagel, the 2018 Hofbräu National Masskrugstemmen Women's Champion and current U.S. record holder (with an amazing time of 5 minutes, 2 seconds). Emily shared her Steinholding story and what she's been up to since winning the national title. Also make sure you check out the video of Emily's awesome performance. 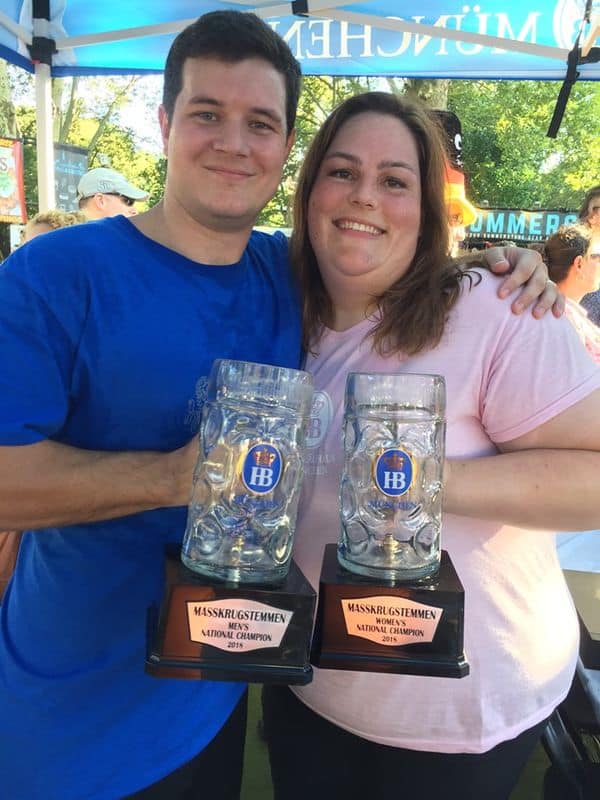 Emily: Well, I'm starting a new job in a couple of weeks so I've been busy, but I'm pretty excited about that. Steinholding has started back up in Nashville at the Bavarian Bierhaus. They're doing it every Saturday at 8pm and they're going for a time based qualifying process, so the person with the longest time will be the champion that they send to NYC to compete in the national finals. I'm judging for these competitions as their reigning champion. We also have the Nashville Oktoberfest, coming up in the fall and they've had bratwurst eating contests and stuff like that, but never Steinholding. They heard about my win at the national championship and they decided to host a competition and they're naming it the First Annual Emily Pagel Masskrugstemmen Competition!

Emily: Yeah it's going to be a yearly thing and I get to judge it and stuff.

USSA: That's crazy that you mention Nashville Oktoberfest because we were going to reach out to them to encourage them to host a competition because they're one of the biggest U.S. Oktoberfests, but it looks like you have it under control already! That's a cool honor.

Emily: I'm super excited that my victory inspired the competition and that I get to be a part of it.

USSA: Has your community done anything else to recognize and appreciate your victory?

Emily: The Bavarian Bierhaus, who I competed for, has a Stein Club and they're going to put my championship belt up in the Stein Club area to show it off. 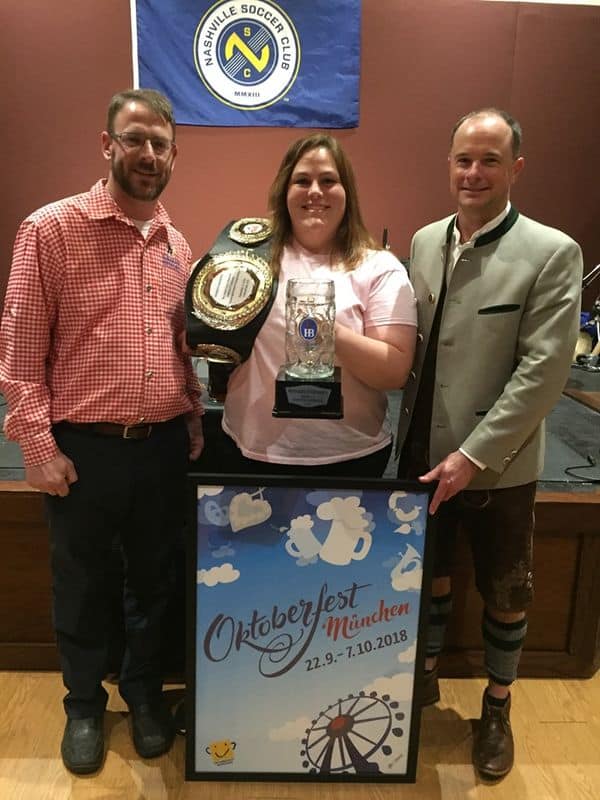 Emily showing off her championship belt and trophy with the owner Bob (right) and manager Andrew (left) of Bavarian Bierhaus in Nashville.

USSA: That's sweet, I'm jealous that you have a good local German restaurant with a stein club and everything and that they're honoring your victory in such a cool way. I don't have any German places near me at all. Sounds like we'll have to come out to Nashville to check things out!

Emily: Yeah we're really lucky to have Bavarian Bierhaus here and there are a handful of other German places in Nashville. One other place that I've been to nearby is Von Elrod's which is a solid place and they have competitions every week.

USSA: Nice! I'll check out Von Elrod's and get them added to our Competition Map. So you've been recruiting an apprentice to be the next national champ?

Emily: Yeah a friend of mine has gotten into Steinholding since I told him about my national championship and he's been getting serious about the sport. He's the one who told me about Von Elrod's and he has competed there. They aren't part of the Hofbräu National Championship series though, so I've been trying to get him to come over to the Bierhaus to compete. He competed at the Bierhaus Oktoberfest last year and he actually won that competition, so I want to get him back in there to represent Bavarian Bierhaus at nationals. Whoever does win from Nashville, I'm looking forward to showing them the ropes and chaperoning them at the national competition.

USSA: Ah nice, I'm glad you're coming back for the National Championship this year. I was always nervous and stressed when I was competing, but after you've won you can really enjoy the weekend more.

Emily: Yeah the pressure is off. I really want to go to the Oktoberfest After Party this year at Bierhaus NYC. I missed it the last couple of years.

USSA: The after party is really fun, I definitely recommend it. This year I'm really going to try to get to Bierhaus for the pre-competition reception on Friday night too. In all my years of competing and coming back to judge, I haven't ever gotten my schedule to line up so I could make it for that, but I'm hoping this is the year. It would hopefully be a less chaotic setting to be able to meet the competitors beforehand since things are always crazy busy on the day of the finals. Speaking of which, I think we may have discussed this right after your win, but I wanted to ask again- when did you first compete in Steinholding and how did you know it was something you wanted to pursue?

USSA: Haha yes, that's always a good way to get people interested. It definitely makes recruiting a heck of a lot easier.

Emily: Yeah so I finished my beer and I went up there and I realized that it was definitely my kind of thing. [Editor's Note: She won that night and went to the 2017 National Championship and came in a very close 2nd place. You can see the video here.] Then last year, I hadn't even heard about whether or not they were doing the competitions again, but I was in the area and going to the movies with my sister so we went in to have dinner before the movie and we were talking about it and one of the managers told me that they were doing it again and it was still going on. So I jumped up like "What?!" He asked if I wanted to give it a try and I was like "Yes I want to give it a try!" The best time up to that point was right around four minutes and I knew I could beat that, so I gave it a shot and won the local championship again. I guess early on they hadn't been sure if they were going to do it again last year, but now that I won the national championship, they are committed to keeping it going. They're pretty proud and it definitely helps get their name out there.

USSA: Other than winning the national title and setting the new national record, what were some of the highlights of your trip to the finals in NYC?

Emily: I've always loved the Statue of Liberty, so I went there. I got to see Grand Central Station. And we also went to the Empire State Building. We were really booking it around when we were there because I wanted to see everything. We were able to fit in some time to see a show too, which is why I didn't go to the after party. I think the Statue of Liberty was my favorite. I might go see her again this year too.

USSA: Have you claimed your prize and taken your victory trip to Munich yet?

Emily: Not yet, but I've schedule the plane tickets. We're going in September. I'm meeting up with the owner of Bavarian Bierhaus since he spent time in Germany in the military and he's going to give me some tips on where to go. We are starting in Frankfurt, and then going to Heidelberg and Rotenberg and then go down to Munich. We're going to try to check out some of the Black Forest and Neuschwanstein Castle and maybe try to go to Austria or Switzerland if we have time. We want to try to check out the Hofbräu brewery while we're in Munich.

USSA: What about competing some more yourself? If you were allowed to compete again in a national level competition, would you do it and why?

Emily: Definitely. Since the national championship, I've competed at Von Elrod's and won a gift card there, so that was nice. Even though I can't compete at the national level anymore, it's still nice to have local opportunities to compete like that. I've been thinking about it and I love the sport and I'm sad that I can't do it at the highest level anymore. I also didn't have much time to practice with the way the timing of things worked out and I really wonder how long I could go if I had more time to prepare and practice for it.

USSA: To see what you could do if you really pushed yourself, huh?

USSA: Despite not having much time to train, you still smashed the record and won the national title, so you were doing something right. What are some training or competition tips that you would give to someone who wants to get to that level of competition?

Emily: I would recommend eating a good amount of protein during training and some people swear by getting a lot of carbs in their system before competing to make sure you have energy. Definitely stay well hydrated. During a competition, you have to focus on your breathing, in through your nose, out through your mouth to keep your muscles oxygenated. Focus on getting your form and structure right too, but mostly try to just avoid thinking about the pain. Sing a song in your head, say a prayer, whatever you have to do to keep your mind off of the pain. Or to keep your mind off of the crowd. Emily Hane [a 2017 National Competitor] told me that she was afraid of crowds, so you have to just not think about that so it doesn't throw you off your game. 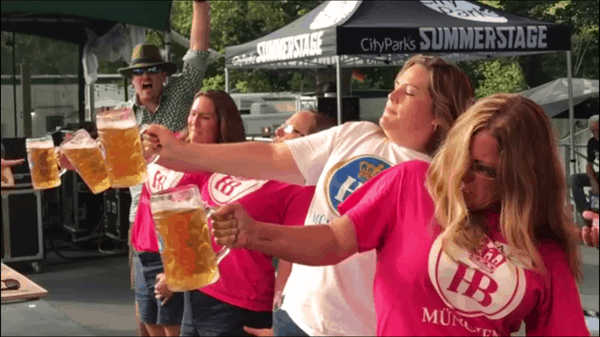 Emily entering a flow state during the 2017 National Championship.

USSA: I can appreciate that. Once we got up on stage and got the steins in our hands, I was able to focus on competing, but for literally weeks in advance leading up to it, I would think about the competition and get nauseous. I don't like being in front of crowds either, but I think for me I was more worried or scared about losing and embarrassing myself, so once the competition got started, that fear became a fuel to keep me even more focused on giving it everything I had.

Emily: I wasn't too scared of the crowd, but I was definitely excited to get up there and see how it was going to turn out. I got a little giddy. I had a lot of good support this second year too. I would think about them supporting them and trying to work hard for them.

USSA: Do you think someone will break your record this year?

Emily: You never know. I'm excited to see what happens!

Emily: I have no idea, but apparently at least 21 minutes for the guys! I was astounded by how long those guys were going.

USSA: Oh for sure, Mike put on an impressive performance. Thanks for your time Emily! Good luck planning your trip and we look forward to seeing you in NYC in September!